Some of you may be familiar with this book. Written as well as illustrated by the painter and filmmaker Jiří Trnka, it is one of his best-known and widely reprinted works. Published in 1962, it soon became a favourite with children. It tells the story of five boys who discover a mysterious wild garden hidden behind a rusty gate on their way to school. In its depths they meet various creatures, mostly animals, with whom they embark on many absurd and humorous adventures. 60 years later, Trnka’s Zahrada (The Garden) hasn’t lost its charm and wit: it now entertains its third generation of readers. Trnka’s ZAHRADA 2 (The Garden 2): The Ingenious Cyberscope is here for those who haven’t read the book, don’t want to, can’t, or who have forgotten all about it. It takes the protagonists from the print to the audiovisual medium. The aim of the authors was not merely a mechanical transfer of images and text into a public space, as it has been attempted by several small theatres with varying degrees of success. The merit of the project lies in the fact that it engages the spectator interactively. 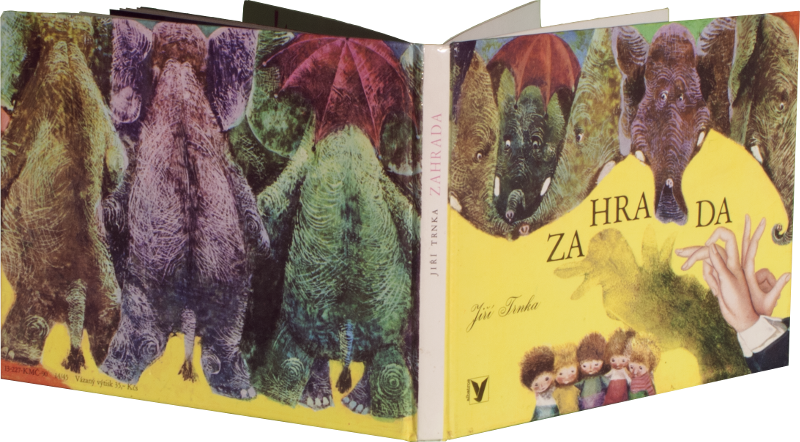 The Ingenious Cyberscope is a high-capacity audiovisual fun, laugh, and charming nonsense machine. It was built upon the ground plans of a book, a creative theatre, a cinema, a circus, and a motocross. The little (as well as the bigger) visitor can look forward to plenty of unusual attractions and surprise encounters inside the Cyberscope which covers the area of several hundreds square meters. The bizarre, and not always friendly, inhabitants of the Garden will materialize through animation, film tricks, projections, but also through new inventions (patents pending), which the authors have had to name. Little (under 30kg) brave individuals are invited to get in an adrenaline-fuelled tricycle chase with a mischievous tomcat on the racecat, to go to the elephantheatre with their parents, or to use a dwarfscope to enter the plaster dwarf’s head and find out about his dreams; they can play the barkphone and if they are lucky (or out of luck), a “wise” whale will stick its head out of the deep aqwhalium in order to give one of its exhausting scientific lectures on the Whale (past, present, and future).